In 2018 Galecki will be an executive producer in CBS sitcom Living Biblically and on April 19, 2018 they pulling off the schedule when it will be cancelled too soon.

Galecki is slated to appear in only one episode in the revived Roseanne series due to his contract with The Big Bang Theory and CBS. Roseanne was cancelled early, but is rumored to be appearing on the Sara Gilbert-starring spin-off The Connors. 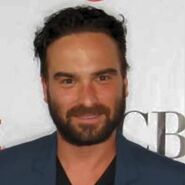 Retrieved from "https://roseanne.fandom.com/wiki/Johnny_Galecki?oldid=12625"
Community content is available under CC-BY-SA unless otherwise noted.