Roseanne Barr (born on November 3, 1952) is an American female comedian, actress, writer, television producer, writer, and director. She is well-known for her role as Roseanne Conner on the hit ABC series, Roseanne.

Roseanne was born in Salt Lake City, Utah as the oldest of four children in a working-class Jewish family to parents Helen (née Davis) and Jerome "Jerry" Hershel Barr. Helen worked as a bookkeeper and cashier while Jerry worked as a salesman. Her parents were partially involved in The Church of Jesus Christ of Latter-day Saints. Roseanne's sister, Geraldine Barr is a lesbian and her brother, Ben Barr is gay. They both later inspired Roseanne to introduce gay characters into her television series.

When Roseanne was 3 years old, she suffered from Bell's Palsy on the left side of her face, which got better after her mother called a Mormon preacher to pray for her. At the age of 6, Roseanne discovered her first public stage by lecturing LDS churches around Utah and was even elected president of a Mormon youth group.

Roseanne was hit by a car when she was 16 years old that left her with a traumatic brain injury which changed her behavior so radically, she was institutionalized at the Utah State Hospital. At the age of 18, Roseanne left home by telling her parents she was going to visit a friend in Colorado for two weeks and never came back.

While living in Denver, Roseanne gave birth to a daughter named Brandi in 1970, whom she gave up for adoption, but they have since reunited. In 1974, Roseanne married motel clerk Bill Pentland and they had three children: Jessica, Jennifer, and Jake.

Roseanne did stand-up gigs in Denver and other clubs in Colorado. She later tried out at the Comedy Club in Los Angeles, California and later appeared on "The Tonight Show" in 1985. A year later, Roseanne performed on "Late Night with David Letterman" and in 1987, she had her own HBO special, "The Roseanne Barr Show" which earned her an "American Comedy Award" for the funniest female performer in a television special.

In her comedy routine, Roseanne introduced the phrase "domestic goddess" to refer to a homemaker or housewive. The success of Roseanne's comedy act lead to her own television series on the ABC network "Roseanne."

"Roseanne" premiered on October 18, 1988 and was watched by 21.4 million households which made it the highest-rated debut of that season. After watching the first episode, Roseanne was outraged when she noticed that Matt Williams was listed as the creator of the show. During the first season of the series, Roseanne sought for more creative control over the show, opposing Matt Williams' authority. Roseanne refused to say certain lines and even walked off the set. She threatened to quit if Matt Williams didn't leave the show. Eventually, Williams left "Roseanne" after the 13th episode.

The show ran from 1988 to 1997, for 9 seasons. During those past 9 seasons, Roseanne had won an Emmy award, a Golden Globe award, a Kids Choice Award, and three American Comedy Awards. For the final two seasons of the show, Roseanne earned 40 million dollars, making her the second highest-paid woman in show business after Oprah Winfrey.

In January of 1990, Roseanne married comedian Tom Arnold after divorcing her first husband, Bill Pentland. Tom was brought in as a writer for "Roseanne" in 1988. In April of 1994, Roseanne and Tom divorced, citing irreconcilable differences. In February of 1995, Roseanne married her one-time personal security guard, Ben Thomas and they had a son named Buck. They divorced in 2002.

In 2002, Roseanne met Johnny Argent on the Internet after running a writing competition on her blog and began dating in 2003 after a year of phone conversations. Roseanne and Johnny live on a 46-acre macadamia nut farm located on the Big Island of Hawaii. Roseanne purchased the property in 2007 for $1.78 million dollars.

In 1989, Roseanne starred in the movie "She-Devil" portraying the role of Ruth. The movie received mixed reviews, but Roger Ebert gave her a positive review for her performance in the movie. In 1991, she did the voice of baby Julie in the movie, "Look Who's Talking Too" which earned her a "Golden Raspberry Award" for "Worst Supporting Actress." In 1997, Roseanne made guest appearances on television shows "The Nanny" and "3rd Rock from the Sun." She portrayed the role of the Wicked Witch in a Madison Square Garden production of "The Wizard of Oz" in 1998.

In September of 1998, Roseanne hosted her own syndicated talk show called "The Roseanne Show" which lasted until November of 2000. In the summer of 2003, Roseanne took on the dual role of hosting a cooking show called "Domestic Goddess" and starring in a reality show called "The Real Roseanne Show," but an emergency hysterectomy put a halt on both projects. In 2004, Roseanne lent her voice to the Disney movie, "Home on the Range" as a cow named Maggie.

Roseanne returned to stand-up comedy in 2005 with a world tour. In February of 2006, she released her first children's DVD called "Rockin' with Roseanne: Calling All Kids." Roseanne's HBO comedy special, "Roseanne Barr: Blonde N' Bitchin" aired on November 6, 2006. Roseanne guest-starred on "My Name is Earl" and hosted Nick at Nite's "The Search for the Funniest Mom in America" show.

Roseanne headlined an act at the Sahara Hotel and Casino on the Las Vegas Strip. From 2009 to 2010, Roseanne hosted a politically-themed radio show on KPFK. Since 2008, she and Johnny Argent has hosted a weekly radio show Sundays on KCAA in the Los Angeles area called "The Roseanne and Johnny Show."

In 2009, it was announced that Roseanne would be returning to prime-time with a new sitcom, but the project was canceled. Currently, Roseanne stars in her new reality show, "Roseanne's Nuts" on the Lifetime TV network. The show stars Roseanne, her partner Johnny Argent, her son Jake Pentland, and her friend, Greg Cipes. The show premiered in July of 2011. 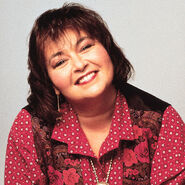 Add a photo to this gallery
Retrieved from "https://roseanne.fandom.com/wiki/Roseanne_Barr?oldid=6248"
Community content is available under CC-BY-SA unless otherwise noted.