Season One follows the Conner family (Roseanne, Dan, Becky, Darlene, and D.J.) as they deal with work, famliy, and friends. Roseanne (Rosanne Barr) is a line worker at Wellman Plastics, along with her sister Jackie (Laurie Metcalf) and friend Crystal (Natalie West).

Jackie has a brief relationship with Booker (George Clooney), the foreman at Wellman. Dan finds sporadic work as a construction contractor and faces a strained relationship with his irresponsible father Ed (Ned Beatty). Roseanne's parents, Beverly (Estelle Parsons) and Al (John Randolph), consider moving to Lanford, but eventually decide against it. Tomboy Darlene struggles with her femininity as she enters puberty and gets her first period. Becky faces dating problems with her first boyfriend Chip, who is introduced in the "Lover's Lane" episode. Season one also finds the Conners experiencing, and surviving, a tornado.

In the "Death and Stuff" episode a door-to-door salesman dies in the Conners' kitchen, and in the season finale, Roseanne stands up to a new foreman Mr. Faber (Fred Thompson), when she leads Jackie, Crystal, and other coworkers as they quit Wellman Plastics. DJ is played by Sal Barone in the pilot episode and by Michael Fishman for the remainder of the series. There is a running gag in this season where they use the word "corn" in every episode. 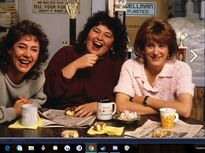 2
We're in the Money 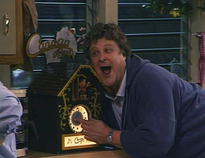 12
The Monday Thru Friday Show

20
Toto, We're Not in Kansas Anymore 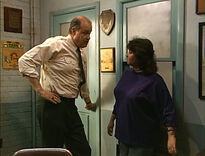 23
Let's Call It Quits
Retrieved from "https://roseanne.fandom.com/wiki/Season_1?oldid=13054"
Community content is available under CC-BY-SA unless otherwise noted.